WHAT SOME DOCTORS LEARNED As a Result of COVID-19: When A Doctor Goes “Radio Silent” Patients Wonder Why and Leave the Practice.

It was a promise Matt Perrin wasn’t able to keep.

“I’ll never take away your independence,” he’d told his mother, Rosemary, then 71, who lived alone on Cape Cod, Mass., in a much-loved cottage.

That was before Rosemary started calling Perrin and his brother, confused and disoriented, when she was out driving. Her Alzheimer’s disease was progressing.

Worried about the potential for a dangerous accident, Perrin took away his mother’s car keys, then got rid of her car. She was furious.

For family caregivers, this is a common, anxiety-provoking dilemma. They’ll promise Mom or Dad that they can stay at home through the end of their lives and never go to assisted living or a nursing home. Or they’ll commit to taking care of a spouse’s needs and not bringing paid help into the home. Or they’ll vow to pursue every possible medical intervention in a medical crisis.

Eventually, though, the unforeseen will arise ― after a devastating stroke or a heart attack, for instance, or a diagnosis of advanced cancer or dementia ― and these promises will be broken.

Mom or Dad will need more care than can be arranged at home. A husband or wife won’t be able to handle mounting responsibilities and will need to bring in help. A judgment call ― “this will only prolong suffering, there’s no point in doing more” ― will be made at the bedside of someone who is dying.

“We want to give loved ones who are sick or dying everything we think they want ― but we can’t,” said Barbara Karnes, 78, an end-of-life educator and hospice nurse based in Vancouver, Wash. “And then, we feel we’ve failed them and guilt can stay with us for the rest of our lives.”

She hasn’t forgotten an experience with her mother-in-law, Vi, who moved in with Karnes, her husband and two children after becoming a widow 30 years ago. At the time, Vi was in her 70s, weak and frail. Karnes was working full time and keeping the household going.

“My mother-in-law and I got into a disagreement, I don’t remember what it was about. But I remember her saying to me, ‘You promised you would take care of me,’ and making it clear that she felt I’d let her down. And I said, ‘I know, I was wrong ― I can’t do it all,’” she remembered. “I still feel bad about that.”

“No caregiver I know sets out to deceive another person: It’s just that none of us have a crystal ball or can predict what the future will hold,” she said. “And the best we can do isn’t always as much as we thought was possible.” “We have to figure out a way to forgive ourselves.”

Richard Narad, 64, a professor of health services administration at California State University, spent months after his wife’s death in December 2011 mentally reviewing the last hours of her life before achieving a measure of peace.

His wife, April, was diagnosed with Type 1 diabetes at age 5 and was legally blind when the couple married in 1994. A year later, she had the first of a series of strokes. Eventually, April was diagnosed with congestive heart failure. In the last 18 months of her life, she was hospitalized 13 times.

April Narad had told her husband she wanted “full code” status in the event of an emergency ― in other words, “do everything possible to keep me alive.” But she was nervous about his willingness to honor her wishes because his own end-of-life views differed from hers.

“I think certain care is futile and you need to give up earlier,” he explained.

In the end, April was rushed to the hospital one night after dinner, gasping for breath. There, Narad directed medical staff to pursue “full code” interventions. But when a physician came out to tell him that death appeared inevitable, Narad remembers saying, “Well, if that’s the case, just call it.”

Had he broken a promise to insist that other treatments be tried? Narad spent months wondering but eventually accepted that he acted in good faith and couldn’t have saved April’s life.

With illness, older couples can end up re-evaluating commitments they’ve made. Kathy Bell, 66, of Silver Spring, Md., promised her husband, Bruce Riggs, 82, that she’d stay with him “through all the changes in our lives” when they married in 1987. Then in August 2011, he received a diagnosis of Alzheimer’s.

The couple moved into a senior living facility, but as Riggs’ condition worsened he had to go to a memory care facility in 2014. The following year, Bell had lunch with a man whose wife lived at the same facility. He told her his therapist had recommended he start dating.

“That planted the idea of possibly doing this myself at some point,” Bell said, and two years ago she met a man who has become a regular companion.

Does she feel she’s broken her promise to her husband, who was committed to a monogamous marriage? “No, I don’t,” Bell said, adding that “it’s not clear whether he knows me at this point. He doesn’t talk. The way I view it: I still love him. I still go to see him. I’m still taking care of him.”

Promises can be explicit ― spoken aloud ― or implicit, understood without direct communication. Both kinds can inspire regret.

Debra Hallisey, 62, a caregiver consultant based in Lawrenceville, N.J., describes making an unspoken promise to her father, Don, when he was diagnosed with congestive heart failure in 2014. Their agreement, which was never voiced: Neither would tell Hallisey’s mother, Doris ― who has diabetes, mobility issues and is legally blind ― how sick he was. 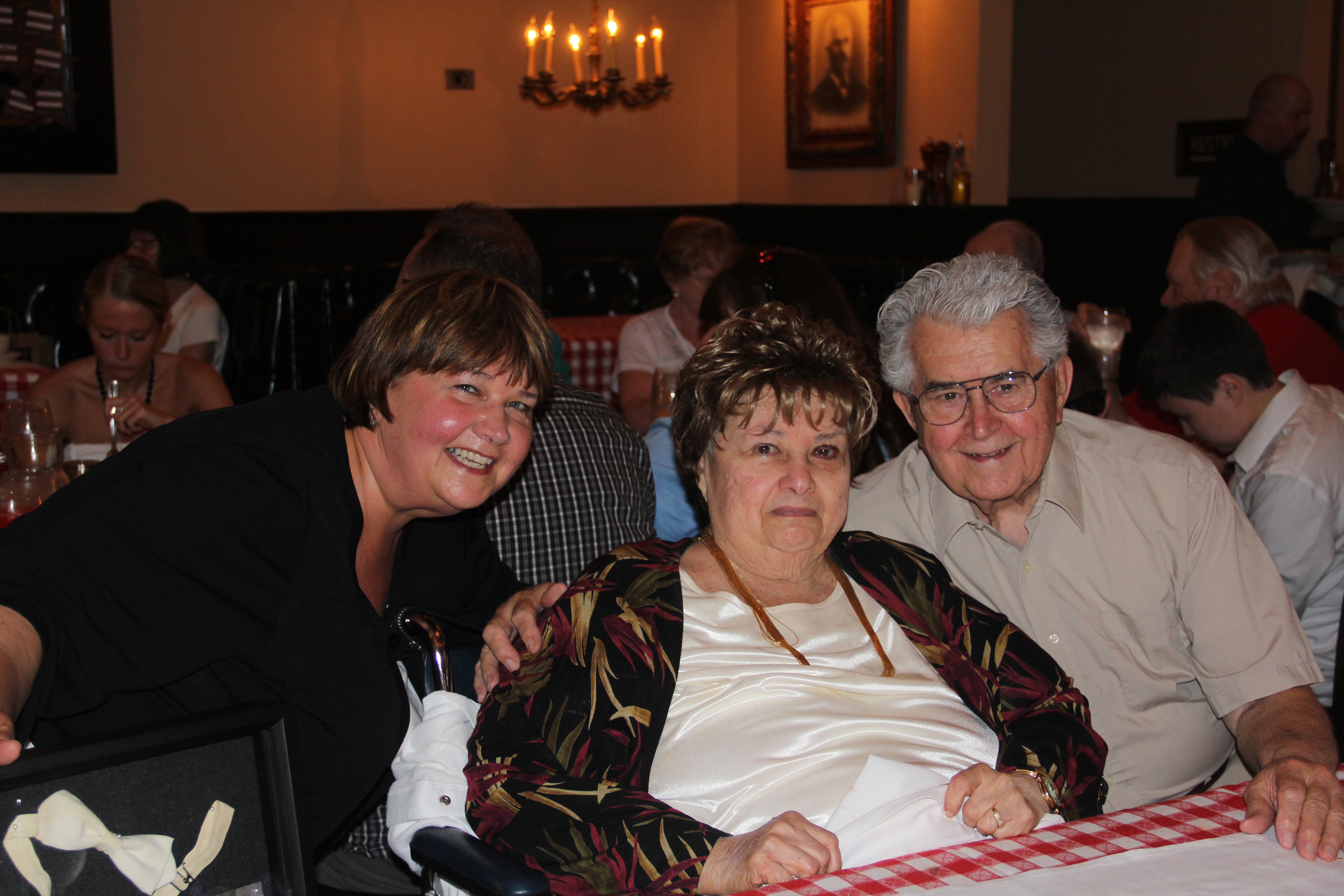 Debra Hallisey and her parents, Don and Doris, at their 60th wedding anniversary.(Courtesy of Debra Hallisey)

“I knew he was shielding [Mom] from knowing the truth. When she would ask questions, he wouldn’t say anything,” Hallisey said. Because her mother was disabled, Hallisey accompanied her father to doctor’s appointments.

When Hallisey’s father died in February 2015, Doris was profoundly shocked and Hallisey was overcome by remorse. “It was then, I said to my mother, ‘Mommy, there are no more secrets. If something is wrong, I am going to tell you, and together we’re going to determine the best thing to do,’” she said.

In line with that promise, Hallisey has been direct with her mother, who uses a walker to get around her home in Somerset, N.J., and has round-the-clock home care. If and when Doris becomes unable to walk, she’ll have to move, Hallisey has said.

“I’ve told her, ‘Mommy, I’ll do everything to keep you in this house, but you have to use your walker and work at staying strong. A wheelchair won’t work in your house,’” Hallisey said. “I know that keeping her at home is a promise I may not be able to keep.”

Matt Perrin made the decision to move his mother, Rosemary, to assisted living in 2017, after realizing he couldn’t coordinate care for her escalating needs at a distance. (Rosemary lived on Cape Cod; Perrin lived in New Hampshire.) Because he’d vowed to protect her independence, “I felt so guilty ― a guilt that I had never felt before,” he admitted.

Rosemary resisted the move passionately, but after a few months settled into her new home.

“I felt relief then, and I still do,” Perrin said. “I wish I didn’t make that promise to my mom, and I wish she weren’t living with Alzheimer’s. But I’m thankful that she’s in a place that’s really good for her, all things considered.”